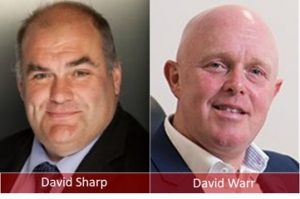 LEIA is pleased to announce its presidential team for 2019-2020.  David Sharp of Schindler Lifts succeeds Warren Jenchner of Apex Lifts as President, David Warr of Titan Elevators is appointed Vice-President. Both appointments are effective 1 January 2019.

David Sharp has been in the lift industry for 35 years and held various positions from apprentice to technician and now serves on the board of directors for Schindler, primarily looking after escalators, transport, infrastructure and the dual brand. On his appointment David said: “It’s an honour to take on the role of President of the Association and I am looking forward very much to working closely with Nick Mellor and his team.”

Nick Mellor, LEIA Managing Director said: “I would like to extend my thanks personally to Warren Jenchner for the generous support he has given me during the first year of my tenure as Managing Director of the Association. I now look forward to working with David Sharp to further develop the initiatives of the Association, in particular on safety matters, during his two-year term.”